In a previous post, Exposure Recovery-How Much Is Possible, we explored the result of under and over exposing an image at ISO 400 by 5 stops without any adjustment.  Then we looked at the result of trying to recover these  images using the exposure tool in Adobe Camera Raw. That study however did not cover the attendant issue of image noise.

The first approach to shed light on the noise issue was to extract the properly exposed brown patch of the Macbeth Color Checker along with the 5 recovered underexposed images. These were then composited together and their luminescence was increased to bring out the noise. This can be seen in the image immediately below:

Careful examination shows that both luminance and chroma noise starts to become noticeable in the -3 stop underexposure, and gets worse as the underexposure increases. While it is usually possible to mitigate chroma noise with little negative effects using image processing software such as Lightroom and Photoshop, reducing noise thereby usually results in a loss of sharpness. Since the degree to which such tools are used or not used is a judgment call that is specific to a given image, it was not considered further.

Is a well-known fact that the use of higher ISO camera settings will at some point result in visible image noise. The dark end of high dynamic range images frequently suffers because the exposure is reduced in an attempt to avoid  blown-out  highlights. Attempts to recover the shadow details in such images  frequently result in increased image noise. So to get a feel for the magnitude of the noise problem, the test subject below was photographed in one stop increments from ISO 100 to ISO 32,000. The red square resting on the top shelf of the photograph below indicates the location from which the 100% image crops were taken for the studies that follow: 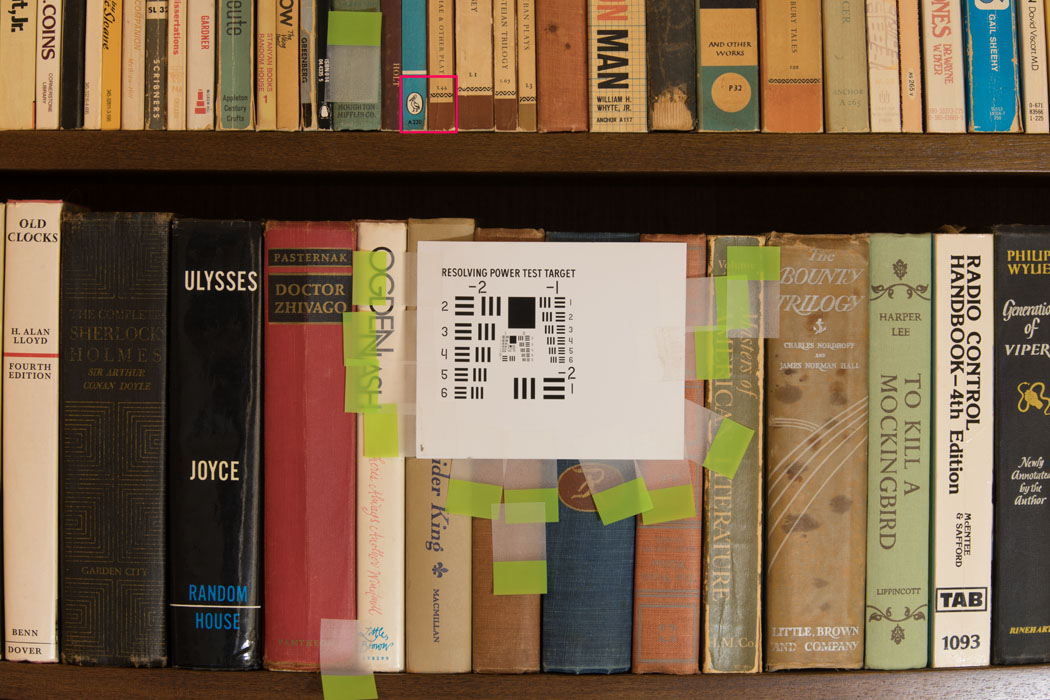 When exposed at the camera metered nominal exposure, inspection of the resulting images showed them to be essentially noise free up to ISO 3200. Beyond that however, noise started to creep in and steadily increased to ISO 32,000. This can be seen below:

We saw previously in, Exposure Recovery-How Much is Possible, that it appeared that a 3 stop underexposure at ISO 400 could  successfully be recovered. So to see how well this would apply over a range of ISOs, the photographic test subject was again photographed from ISO 100 to ISO 32,000 with a 3 stop underexposure. Image crops were taken as above and corrected in Adobe Camera Raw using the exposure tool to apply a 3-stop exposure increase. The results can be seen below:

From this it appears that noise starts to be faintly noticeable at ISO 400 increasing mildly to ISO 1600. At ISO 3200 noise may be correctable, but the image quality beyond that would likely suffer serious noise consequence.

While “exposed to the right” can be used to avoid noise in the shadows, particularly at higher ISO settings, it also invites the possibility of highlight clipping which we have previously seen occurs at around a 2 stop overexposure at ISO 400. Compounding difficulties is the fact that the meter found in DSLR camera viewfinders only measures luminance for an average neutral gray for the scene, and does gives no warning regarding clipped highlights or clipped colors. Using live view to display a histogram improves matters, but most cameras only provide a choice of looking at the luminance histogram or the color histogram. So while the luminance histogram may indicate that highlights will not be clipped, it is still possible that some colors may, and vice versa. How important is this? Well it depends on what your photographic intention is and what you are photographing. Sometimes it pays to clip the highlights – particularly for things like streetlights in a night scene. At other times it pays to slightly underexpose in order to preserve details in the highlights.

Given that the Canon 5D Mk IV is representative of the current state of DSLR technology, what have we learned from all this? Simply, that images or parts of images receiving a 3-stop underexposure appear to be successfully recoverable up to approximately ISO 1600 without incurring excessive noise. Hopefully these studies will better enable you to        pre-visualize the results to be expected from the range of ISO and exposure bias you may choose to apply when a photographic subject presents itself.

This entry was posted in Blog, Photo Topics, Tech Talk. Bookmark the permalink.